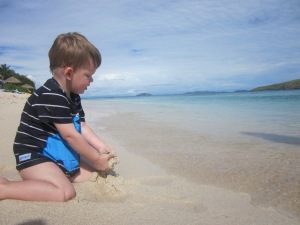 My little boy is called Noah.  He is very much like other 3 ½ year olds, except that he can barely speak.  You see, Noah has Childhood Apraxia of Speech.  This was a diagnosis I initially feared, because I knew there was no easy fix, except for many years of hard work to help him develop his speech.

Speech apraxia is a condition mostly of unknown cause.  It affects the area of the brain that sends signals to the muscles used for speech.   There is a problem with coordinating the complex movements that are needed to produce and sequence speech sounds.  These children can understand what is said to them.  They even know what they want to say.  But there is a breakdown in communication between the speech planning area of the brain and the muscles used to produce speech.

Imagine you know what you want to say in your head.  You can even imagine what it should sound like.  But when you go to move your mouth, either nothing comes out, or you produce sounds that do not sound like the words in your head.  And nobody understands you.

I had been concerned about Noah’s speech from the age of two.  He had some words, but he wasn’t picking up new words at the rate of other children.  There were words that we thought he had mastered that just seemed to disappear from his vocabulary.  By age 2 ½ he was becoming very frustrated with not being able to communicate with us.  In exasperation, we would sometimes half-jokingly say,”Use your words!” knowing that he just didn’t have the words.  We were frustrated too.  There were a lot of tantrums and crying (Noah, not us!). 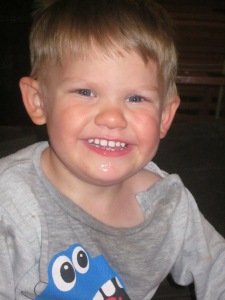 I started reading speech therapy websites to try and find some solutions to help my son and get some clues as to what could be affecting his speech development.  About this time we met a couple who run a school for deaf children in Uganda and they had given us a DVD showing some of the children signing their names.  I was watching it with Noah one morning and then turned to find him looking intently at the screen and trying to copy the hand movements the children were making.  That day, I started looking for information on baby sign and found some websites to get me started.  I taught Noah the signs for ‘drink’, ‘eat’, ‘more’ and ‘please’.  Within a couple of days he was able to make the signs himself.  What a breakthrough!  The frustration of trying to work out what Noah wanted started to be relieved.  I introduced some more signs gradually and was thrilled to finally be able to see Noah communicating his needs and wants.  We eventually saw him start to attempt to say the words that went with the signs.

About this time I had made an appointment with a speech therapist to have Noah’s speech evaluated.  We were given some activities to do at home to help with ‘m’, ‘p’ and ‘b’ sounds.  I must say, to start off with, even these simple exercises were beyond his capability and 2 ¾ year old attention span and I wondered if we would make any progress.  Our speech therapist suspected an articulation issue due to some slackness of Noah’s lower jaw and tongue, however over several months it became clearer that Noah had speech apraxia.  I had read about it and it was new to me.  As a medical student I had never learned about speech apraxia in children.  I had never even read about it as a doctor…until I was trying to find out what was affecting my own son.  I feared it and initially dismissed it, mainly because it seemed like the hardest speech problem to address.   However, once we had the diagnosis it was a relief because I now knew what we were dealing with, could review specific information and focus on what would help little Noah to speak.